10 Best Places to Visit in Hyderabad 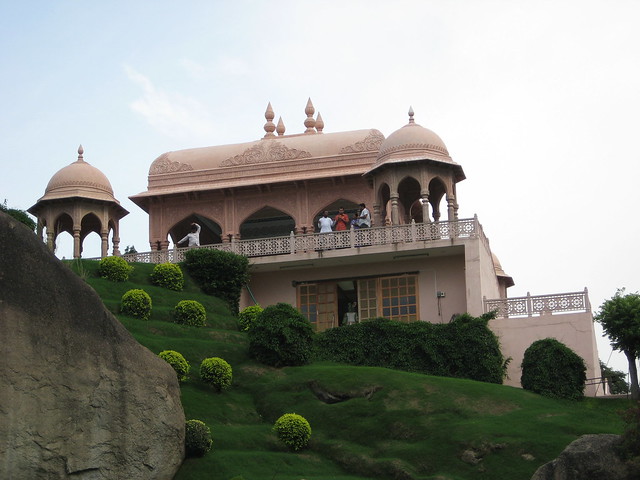 The Pearl City, Hyderabad with its unmatched blend of history and modernity, hypnotizes everyone, whoever sets his/her foot in this beautiful city of Nizams. With a history as old as 400 years and the status of the metropolitan city, Hyderabad promises a uniquely refreshing experience to all.

Here is a list of the most popular tourist spots in Hyderabad; the ones which you mustn’t not miss:

Hyderabad tour is incomplete without a visit to Charminar. An amazing blend of Indo-Islamic architecture, Charminar represents the glorious history of the city. Built in 1591 by Sultan Mohammed Quli Qutb Shah, Charminar is a square-shaped structure which is 56 meters high and 30 meters wide. Popularly known as ‘Arc de Triomphe of the East’, Charminar was constructed in the honour of Bhagmati, wife of Sultan Mohammed Quli Qutb Shah; immediately after he had shifted his capital to Hyderabad, which was earlier in Golconda. The name Charminar, which means “four (chaar)” “pillars (minars)” came from its structure which consists of four intricately carved pillars, one on each side.

One of the oldest and most popular shopping areas of Hyderabad, Laad Bazaar is located adjacent to Charminar. It is said that this market was equally lively even during the times of the Qutub Shahis and the Nizams. Presenting an ages old heritage, the “Laad Bazaar” has got its name from the word “Laad” meaning Lacquer. This market boasts of an incomparable varieties of bangles, which have Lacquer has one of its key material.

Located at 280-foot-high hillock of Kalapahad, the beautiful Birla Mandir has derived its name from the industrialist Birlas who have constructed Birla temples in various parts of the country. Constructed in 1976, it is said it took close to 2000 tonnes of white marbles to build this stunning temple which was brought from Rajasthan. It has drawn its architecture from the amalgamation of three known architectural designs – South Indian Architecture, Utkal temple Architecture and Rajasthani Architecture.

Connecting the twin cities, Hussain Sagar Lake boasts of being the largest artificial lake in Asia. On the tributary of Musi River, it was excavated during Ibrahim Quli Qutub Shah’s reign, in 1562 AD. It has got its name after Hussain Shah Wali. The main attraction is 16 m high white granite statue of Lord Bhudda with a weight of 350 tonnes, situated at the middle of the lake. The lighting show here is worth watching. One can take a ferry ride to the statue, which takes and brings back visitors at regular intervals.

Chowmahalla Palace, with literal meaning of ‘four palaces’ in Urdu language was built in the 18th century. It was during the reign of fifth Nizam, Afzar-ud-Daulah, Asaf Jav V, from 1857 to 1869, that the palace was completed. Initially spread across an area of 45 acres, the palace now covers 12 acres of land. The palace has two courtyards – the northern courtyard and the southern courtyard. The southern courtyard has four palaces which are Afzal Mahal, Tahniyat Mahal, Mahtab Mahal, and Aftab Mahal. Out of these, Aftab Mahal is the biggest of all, with two storeys. Khilwat Mubarak, the heart of the palace, Clock Tower, Council Hall and Roshan Bungalow are other worth visiting sections of it.It has been opened for public viewing since 2005.

Located in Madhapur, near the Hi-tech City, Botanical Gardens have been developed by Forest Department. It is spread over an area of 120 acres. Opened with just 5 sectors, it has now 19 Vanams or sectors. Botanical Garden has a rich collection of flora with a range that includes ornamental plants, bamboos, palm trees, fruit and timber trees, medicinal plants and aquatic plants.

On a 2000-foot high hill, Falaknuma Palace is located just at a distance of 5 km from the historic monument Charminar. Built by the Nawab Vikar-ul-Umra, it took close to 9 long years for its completion. However, later in 1897, it was purchased by Nizam VI to serve the purpose of royal guest house. Spread across an area of 32 acres, the palace has been constructed with marble and if often referred as the ‘mirror of the sky’. There are almost 22 halls and 220 rooms in the palace along with an impressive library, captivating chandeliers, marble staircase and many attractive features which make it an architectural marvel.

Built in the European style, Purani Haveli is situated at the South east of Afzal Gunj Bridge near Dewandevdi. In 16th century, it was used as the residential quarter of Mir Momen, the Peshwa of Mohammed Quli Qutub Shah. However, later in 18th century, it was acquired and then renovated by Nizam III. It was then passed on to his son Sikandar Jah, who, although moved to the Khilaurat complex, which gave it the name of Purani Haveli. Haveli presents a beautiful amalgamation of traditional Indian courtyards and 18th century European facades. It has beautifully designed interiors, antique furniture, vast courtyards and rooms with colourful tiled walls and mosaic floors.

Opened to public in 1963, Nehru Zoological Park is also located near the near Mir Alam Tank of Hyderabad. Boasting of about 1,500 species of birds, animals and reptiles this largest zoo in India is run by the Forest department, Government of Andhra Pradesh. With a vast area of about 380 acres, it is quite popular as a picnic spot. The history museum here also attracts many visitors.

Since 1991, Ramoji Film City has been alluring tourists from every corner of the country. One of the largest film studios in the world it has the capacity to house almost 50 film units within a given point of time. It is also listed in Guinness Book of World Records as well. Spread over 2500 acres, it is situated about 30 km away from Hyderabad. Its brilliant architecture and sound technical facilities make it suitable for all the pre and post production of a film.

This city is a place worth visiting at least once in a lifetime. In fact, it is impossible for anyone to soak in the multifarious charms which the city has to offer in a limited time span. Located on the banks of the Musi River, the city of Hyderabad was established in 1591 CE by Muhammad Quli Qutb Shahies. The city is noted for its unique culture, a lineage which can be traced back to the Asaf Jahi rulers, who were great patrons of literature, art, architecture, culture, jewelry collection and rich food.